Finally, the wait is over, Samsung’s now flagship phone, the Galaxy S8 is here. Chances are though, you’ve already read about its major new features due to a leak bonanza this year. I have to admit, someone really dropped the ball, with very little effort, I found almost every detail, exposed at great length before the Galaxy S8’s grand reveal.

At the end of the day though, when the curtain was officially lifted the leaks didn’t do this phone justice. The Samsung Galaxy S8 is an amazing piece of tech (and it doesn’t explode).

So, let’s address the first major feature of this phone, the one that will make it stand out instantly from everything else on the market currently – the display. Clocking in at a whopping 1440×2960 (5.8in in old speak), it’s a head turner, it’s of course not the first display of this size, the Note 7 had something very similar, but the bezels on this baby are almost completely gone, save a tiny strip top and bottom.

Samsung has always been playing catch up with Apple when it comes to design, I feel, it’s a personal opinion, but the phones have always reminded me of the sleek design elements associated with the iPhone. The Galaxy S8 has those wonderful rounded edges that really show off the wrap around screen (known as the infinity display), aluminium shell, and its very slim profile (8mm), simply, for the first time I feel it may have a leg up on the current iPhone 7 model.

David Bowie sung about ch-ch-ch-ch changes, and Samsung has made some, to the fingerprint scanner to be exact. I’ve just been heaping praise on the amazing new screen, but that has come at a cost, no longer is there room for it on the front, so the scanner now lives on the back of the phone, right next to the camera. I would have thought that even though the screen fills almost the entire from of the phone, some sort of scanning system could have been implemented, I guess not. I feel this will be the biggest change long time users will take the longest to warm to.

There is hope though. When Samsung’s Note 7 wasn’t blowing up, it was wowing us with its iris and facial recognition abilities. In fact, I almost got one simply because of this feature (in hindsight now, I’m really glad I didn’t). The Galaxy S8 will carry on this tech and with any luck we might not need to worry about the awkward fingerprint scanner on the back, hooray!

Let’s check a few things off so far, it looks great, honestly, it looks amazing. It has cool eye scanning tech, like previous recent Galaxy phones, it’s water resistant with a rating of IP68, which essentially means it’s protected from dust and water to a maximum of 1.5 meters for up to half an hour (so if you fall in the pool, you should be okay). Wireless (or wired, your choice) charging, support of 4GX and probably the biggest thing the Samsung phones have always had over the Apple competition, additional storage, you can use a microSD card up to 256GB in size. Phew… So, what else does it have? Well, I’m glad you asked, ladies and gentlemen, I’d like to introduce you to…

Bixby – A New Way To Interact With Your Samsung S8

The name may evoke an English professor or maybe a royal butler, but it’s something you’re going to be using in a way similar to Amazon’s Alexa. Samsung has made the wise decision to toss out the horrid voice they previously used and hired, Bixby to take control of your Galaxy S8 ‘experience’.

So, what is Bixby? From what I can gather, it’s another variation on an AI assistant. You might take a picture of a landmark or building and tell Bixby to get more information on it, or perhaps you ran out of milk? Take a picture of it and with any luck you’ll be directed to somewhere online that sells milk (milk might be a bad example).

Bixby does more than just work with the camera of course, it can help with setting reminders or calendar organisation, you can steam content to devices, or if you have any IoT devices in your home (IoT devices are smart devices, wi-fi lighting, smartlocks etc). And best of all, Bixby has its own button, instead of shouting out “Hey Bixby” (which in practice, with that name, would sound super dumb), so tap that and give your digital servant its orders, yay, slavery has come back in fashion.

Having built all this excitement for Bixby, it’s time to face the harsh realities of living in this wonderful country. Bixby may have a delayed Australian release. The issue is, Bixby was designed with Korean and US dialects in mind, and currently the little digital bastard is having issues with our accent, let’s hope by the time of the launch at the end of April, Bixby can work out what we’re saying.

With so much innovation going into this new flagship model, surely the camera is going to see our jaws hitting the floor in amazement, right? Errr, yeah, about that…

Remember the Galaxy S7, well I hope you liked the camera, because Samsung has deemed that it wasn’t broken, so it didn’t fix it. It’s using (I’m hesitant to use the term re-using, as I’m sure there are differences, but for comparison sake, it’s 100% identical) the same 12mp camera. That being said, it was an excellent camera first time around, and is still impressive today.

While researching this camera I’ve found one tiny difference (and this would come under the differences mentioned above). Every time you take a picture, the camera will take three, it merges them together to give you a super sharp image (unless all three are rubbish, then I’m sure nothing will help you). The camera software it will use will be variations on what was used in this year’s Galaxy A5, giving the user access to various modes with swipes instead of a menu system. Lovely and user friendly.

Should You Buy The Samsung S8 ?

This is an important year for Samsung. Last year they made the headlines for all the wrong reasons, and couldn’t seem to catch a break, but the S8 seems to be a step in the direction they sorely needed.

When you look at the feature set, the S8 only has minor improvements over the previous version, but honestly, that display. The display is what will shift these phones off the shelf, it honestly looks amazing, and it remains to be seen what Apple have in store with its new iPhone due later in the year (rumoured to have an edge to edge screen as well). Yes, the phones faster, and the battery life will no doubt be better, but is it worth your time and money? 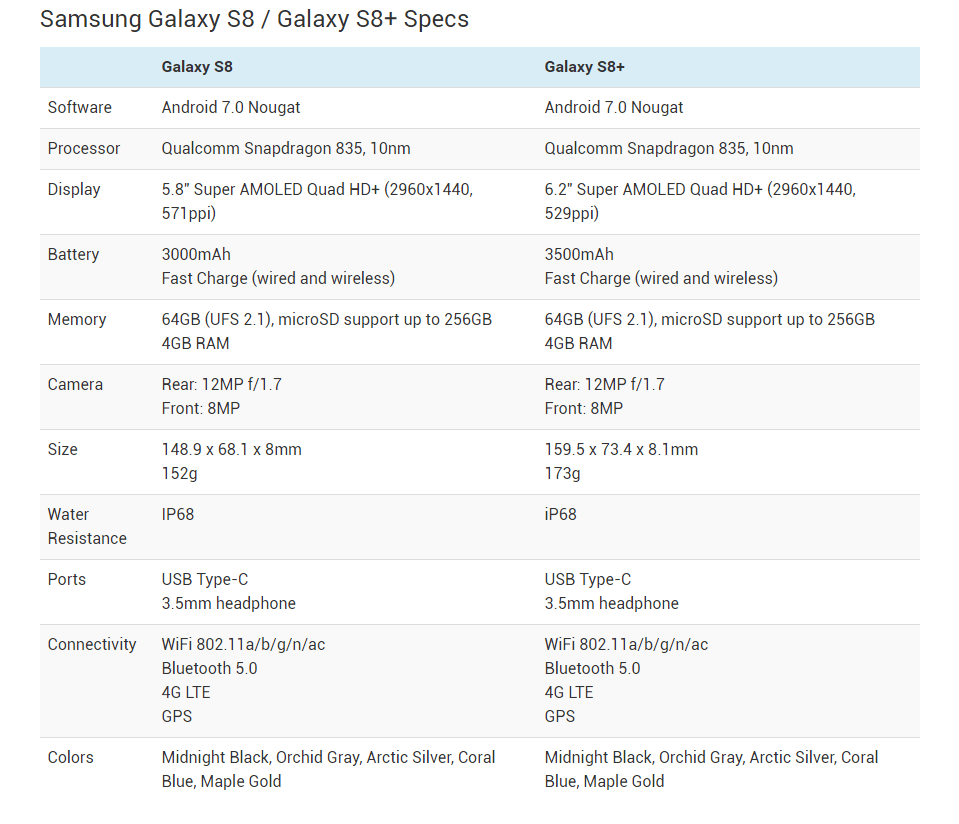 That’s the tough thing about these reviews, we won’t really know until we get our paws on one and even then, it will need to be put to the test out in the ‘wild’. So far, the experts, people with hands on experience, are giving it the thumbs up. And of course, Samsung has a lot to prove as well as a lot to lose if this crashes, but so far, I feel this is the phone to beat this year. Samsung has thrown down the gauntlet, “come at me Apple”.